Hi there! Welcome back to Dumb People Rushing into Dangerous Situations Against the Advice of Their Security Personnel. In today’s installment, Ana wants to join the danger!

You are super scared and worried, but not for your own safety. Even though Leila has targeted you specifically at this point. But no, you worry about Christian. Plagiarism.

I stand gaping at him, unable to move, drinking in every little detail: his unruly hair, the tightness round his eyes, the tense jaw, the top two buttons of his shirt undone. I think I must have aged ten years. Christian frowns at me in concern, his eyes dark.

Girl. He was gone from your sight for all of five minutes.

“Taylor and his crew are checking all the closets and cupboards. I don’t think she’s here.”
“Why would she be here?” It makes no sense.
“Exactly.”
“Could she get in?”
“I don’t see how. But Taylor is overcautious sometimes.”

Let’s keep this in mind, shall we.

“Are you going to call the police about the car?” I ask as I turn around.
He sweeps my hair out of the way, his fingers softly grazing my naked back, and tugs down my zipper.
“No. I don’t want the police involved. Leila needs help, not police intervention, and I don’t want them here. We just have to double our efforts to find her.” He leans down and plants a gentle kiss on my shoulder.

I’m serious. So much of the dramatic tension in the scenes is derived from the fact that the protagonists have to handle the situation themselves. But when you strip the story of its supernatural elements, there is no feasible reason for the dramatic tension to still exist. Yet there it is.

I wake with a jolt—disorientated. Have I been asleep?

Does this scene feel familiar to you guys?

Blinking in the dim glow the hallway casts through the slightly open bedroom door, I notice that Christian is not with me. Where is he? I glance up. Standing at the end of the bed is a shadow. A woman, maybe? Dressed in black? It’s difficult to tell.

There’s just something so….. familiar about it. Like, déjà vu.

In my befuddled state, I reach across and switch on the bedside light, then turn back to look but there’s no one there. I shake my head. Did I imagine it? Dream it?

Oh, yeah! Plagiarism. Also, what the fuck, Ana? Scream or something! You are actively being stalked, and not just by Christian this time. Someone is watching you sleep. Sound the alarm, girl!

“You opened the balcony door?” he asks, frowning down at me as we arrive in his room.
“No.” I don’t remember doing that. I recall scanning the room when I woke. The door was definitely closed.
Oh shit . . . All the blood rushes from my face, and I stare at Christian as my mouth falls open.
“What?” he snaps, glaring at me. 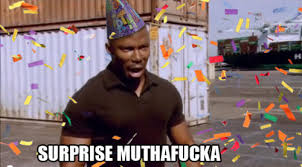 You guys are dumb. The previous scene was all about how someone broke into the apartment, but you couldn’t find her. It takes you this long to put together the fact that she’s still there?

“She’s still fucking here,” he hisses down the phone.
Approximately three seconds later, Taylor and one of the other security guys, burst into Christian’s bedroom. Christian gives them a précis of what has happened.

“How long ago?” Taylor demands, staring at me all businesslike. He’s still wearing his jacket. Does this man ever sleep?
“About ten minutes,” I mutter, for some reason feeling guilty.

Don’t feel guilty. But do feel dumb, by all means.

“She knows the apartment like the back of her hand,” says Christian. “I am taking Anastasia away now. She’s hiding here somewhere. Find her. When is Gail back?
“Tomorrow evening, sir.”
“She’s not to return until this place is secure. Understand?” Christian snaps.

First of all, if she knows this apartment so well, maybe you should have just taken Ana and gone to a hotel to begin with. Remember that whole “checking the closets and cupboards” line? Yeah, great job guys.
Secondly, at least Christian cares enough about his housekeeper that he doesn’t want her coming in to an unsafe circumstance. But he doesn’t have to be such a dick about it.

“Aren’t we all overreacting slightly?” I ask.
Christian glowers at me. “She may have a gun,” he growls.
“Christian, she was standing at the end of the bed. She could have shot me then, if that’s what she wanted to do.”

Oblivious Bella is oblivious to the danger surrounding her. Plagiarism.

“Supposing she tries to shoot Taylor?”
“Taylor knows and understands guns,” he says with distaste. “He’ll be quicker with a gun than she is.”

See also, being “quicker with a gun” than someone else is irrelevant if they are sneaking up on you.

And Leila is clearly very sneaky.

She took lessons from this guy.

“Ray was in the army. He’s taught me to shoot.”
Christian raises his eyebrows and for a moment looks utterly bemused. “You, with a gun?” he says incredulously.

I am equal parts STFU and IKR about Christian’s reaction. But yeah, Ana with a gun? Damn.

Taylor meets us in the foyer and hands me my small suitcase and my black Converse. I am stunned that he’s packed me some clothes. I smile shyly at him with gratitude, and his returning smile is swift and reassuring. Before I can stop myself—I hug him, hard. He’s taken by surprise, and when I release him, he’s pink in both cheeks.
“Be careful,” I murmur.
“Yes, Miss Steele,” he mutters.
Christian frowns at me and then looks questioningly at Taylor, who smiles very slightly and adjusts his tie.

Are carphones even a thing still? Especially since we all know by this point that Christian always carries his Blackberry with him.

My heart clenches again. Mrs. Robinson said she saw him.
Did she or didn’t she? She’s lying. Why?

Uhhhhhhh. Maybe because she’s his ex-lover and she wants to exaggerate the emotional connection that she still has with him. Or maybe he’s lying, and he wants to downplay the aforementioned connection. Either way, one of them is lying to you, but the real question is “who?” not “why?”

Christian pulls into the impressive, leafy driveway of the Fairmont Olympic Hotel and parks near the front door, beside a quaint stone fountain.
“Come.” He climbs out of the car and retrieves our luggage. A valet rushes toward us, looking surprised—no doubt at our late arrival. Christian tosses him the car keys.
“Name of Taylor,” he says. The valet nods and can’t contain his glee as he leaps into the R8 and drives off. Christian takes my hand and strides into the lobby.

Yeah, I’m pretty sure that the valet can absolutely contain his glee. An R8 is probably not the flashiest car he’s had the pleasure of parking while working at the super-fancy Fairmont Olympic Hotel. But everybody has to fawn over Christian Grey. Plagiarism.

Of course, she’s over-awed by Christian. I roll my eyes as she flushes crimson and stutters. Jeez, even her hands are shaking.

….. everybody has to fawn over Christian Grey. Plagiarism.

Did nobody catch that?!

“You never cease to amaze me, Anastasia. After a day like today—or yesterday, rather—you’re not whining or running off into the hills screaming. I am in awe of you. You’re very strong.”

Edward is always waiting for the running and the screaming. Plagiarism.

“Where are you going to hang José’s portraits of me?” I try to lighten the mood.

This is super creepy. On top of everything else going on, Ana is joking about her best friend’s obsession with her. Maybe Ana is good at repressing unpleasant things. Maybe she’s just “good with weird.” Plagiarism.

“You make me forget everything. You are the best therapy,” he breathes,

“I could watch you sleep for hours, Anastasia. But I’ve only been here about five minutes.”

Christian said I would have another Audi, like all his submissives. The thought is unwelcome. Since I was so generous with the money he gave me, there’s not a lot I can do.

So nobody had insurance on this brand new vehicle?

After the arrival of Dr. Greene

“And you just stopped taking it [the pill]? Just like that?”
I flush, feeling beyond foolish.
“Yes.” Could my voice be any smaller?
“You could be pregnant,” she says matter-of-factly.
What! The world falls away at my feet. My subconscious collapses on the floor retching, and I think I’m going to be sick, too. No!

Okay, let’s not pretend like you didn’t know that pregnancy is a possibility when you constantly have sex with someone and you aren’t on birth control. But also, you two have been pretty religious about condom use, so chill the fuck out and tell the doctor that you’ve been using a backup. Damn.

“You’re in the clear. You’ve not ovulated yet, so provided you’ve been taking proper precautions, you shouldn’t be pregnant.

Damn, Doc, you should have maybe led with this information.

Also, Dr. Greene, I’m very disappointed in you. At no point do you assess the situation that Ana is in, or show any genuine concern for the well being of this patient. But it’s cool, just collect your house call fee and go about your day.

Also also, I JUST realized that so far at least two of the characters are named after the actors from Twilight: Ashley Greene and Taylor Lautner.

I squeeze a small amount of soap on my hand, rub my hands together to create a lather, then place them on his shoulders and gently wash away the line of lipstick on each side. He stills and closes his eyes, his face impassive, but he’s breathing rapidly, and I know it’s not lust but fear. It cuts me to the quick.

So… she’s trying to wash away lipstick with her bare hands. Lipstick that’s had what, a solid 24 hours to set on his skin? Good luck with that mess.

His diaphragm moves rapidly with each shallow breath, his body is rigid, tension radiating off him in waves as my hands move along the line, erasing it. Oh, if I could just erase your pain, I would—I’d do anything—and I want nothing more than to kiss every single scar I see, to kiss away those hideous years of neglect. But I know I can’t, and my tears fall unbidden down my cheeks.

“No. Please, don’t cry,” he murmurs, his voice anguished as he wraps me tightly in his arms. “Please don’t cry for me.” And I burst into full-blown sobs, burying my face against his neck, as I think of a little boy lost in a sea of fear and pain, frightened, neglected, abused—hurt beyond all endurance.

Okay, I’m not going to lie, I really like this excerpt. I think it does a good job of conveying complex emotions.

Sadly, I know that the tortured past back-story will be used again to explain away his shitty behavior as an adult.

Let’s all just savor these good couple of paragraphs and pretend for a moment that the book ends here.