abuse, assault, creepers, no excuses, not asking for it, rape, victim blaming

At some point Saturday night, I checked twitter and saw this tweet by @Jenny_Trout: “Why do men in bars think women come there to be stared at? You are not the draw, fellas. It’s where the booze is.”

I didn’t think much of it, just something like “haha, yeah that’s so true.” Tapped ‘retweet,’ went on my way. I didn’t look at twitter again before I went to bed. Sunday morning I got up, fed the kids breakfast, went about my day, and started doing some laundry. I was planning to spend most of Sunday ignoring twitter/facebook/email/whatever in order to get some big stuff done around the house. But something about Jenny’s tweet had started to nag at me a little, so I looked to see if she had said anything else about it.

Then I saw this: Let me tell you about some bull shit, dear readers! Essentially, she tried to go to a bar with some friends but was harassed by a drunk creeper and then parking-lot stalked.

My initial reaction was “What the ever-loving fuck?” Then I got upset. And then I got angry, to the point that my hands were shaking so badly I could barely light a cigarette. A lot have people have commented on the post by now. Many people have said something along the lines of, “that’s so awful / that’s horrible / I’m so sorry that happened” because it is awful, it is horrible, and it should not have happened. Some women have mentioned, “something just like that happened to me when…” because this kind of shit happens far too often. Some women had comments like, “I use the death glare / I know self defense / guys are too intimidated by me” and that’s true for some women but it is never a guarantee of safety.

One guy in the comments – and I almost feel sorry for him because he just does NOT understand – while expressing his opinion of how awful that was, tried to explain the other side. He talked about how some guys go to bars with the sole intention of picking up women, and these men expect women are there for the same reason. I see what he is trying to say, I really do, but I disagree with the whole concept because we should not be preemptively excusing offensive behavior. As intelligent adults, men and women are supposed to respect one another’s wishes and boundaries. Women should not have to understand the man’s side to it, especially if he is making unwanted advances. We don’t need to hear that this certain guy came to the bar looking to hook up, and that’s why he’s being a creeper. Likewise, if a woman is aggressively hitting on a guy and he’s clearly uncomfortable with it, we shouldn’t just give the woman a free pass and say she is just being flirty. It should be as simple as, “hey, I’m trying to spend some time with my friend, could you leave us be,” or “no, I don’t want to dance,” or “no thanks, don’t buy me a drink, I already have one,” or even, “hey I’m here with my husband/wife/boyfriend/girlfriend/partner, would you mind backing off.”

Here’s a little story that explains why I personally think we shouldn’t have to consider the motivations for the people who harass, assault, or otherwise abuse. Years ago my mom shared a story with me, like mothers and daughters do, about the time a guy asked her out on a boat with him when she was a teenager. As it turned out, this was the story about the time she was almost raped.

Basically, it was a “keep your eyes more open than I did” kind of story. And a “when all else fails, you can do this” story. So she was on a boat with the guy, he stopped in the middle of open water and they were just drifting with the current. He put the make on her, with attempted kisses and generic endearments.

At this point it was clear that his intentions all along had been to score. Mom made it equally clear that she wasn’t there for that, she just really liked boating. Then came the accusations, that she was a cock tease, she knew what they were out there for, she needed to quit wasting his time, etc… So when the guy started trying to force her, being the ever resourceful person she always was, my mom grabbed a handful of scrotum, pulled down, and started twisting.

Long story short, Mom made it back to shore safely, and the guy spent three days in the hospital after emergency surgery to put his testicles back where they belonged. Knowing all that, do I give a shit that the guy asked my mom out with the sole intention of getting some, and thought that she was on the same page? No, all I give a shit about is the fact that she said no, he didn’t listen, and if she hadn’t have been able to incapacitate him, she would have been raped.

So keep your explanations that “guys go to bars looking for women and expect women there are doing the same.” We don’t need to hear that shit. There are no excuses.

Now let me go ahead and throw in this disclaimer: do I think all men are evil? Hell no. Not all men are bad. There are quite a few great guys out there. Otherwise I wouldn’t be married. Are all women perfect angels? Again, hell no. Women can be just as pushy, grabby, or harassing. The difference is, if a woman puts unwanted advances on a man, chances are really, really good that he can overpower her and get away from her if he so wants. And when he does get away from her, his buddies aren’t going to say, “Damn Bob, you were asking for it, you shouldn’t be wearing slacks like that on a Tuesday!” No, of course not. They will more likely say something along the lines of, “What was up with that crazy bitch?” Meanwhile, if a woman gets assaulted and then files a complaint, she often does hear, “You were asking for it.” “You shouldn’t have dressed that way.” “You shouldn’t have been at the bar.” “You shouldn’t have been walking alone.” And on top of that, she might hear, “Get over it, you crazy bitch.”

Let’s look at the society we live in. From before we hit puberty, women are taught the phrase, “No means NO!” It’s supposed to be something like our personal mantra of safety. If we say no, if we don’t consent, then nothing can happen. And if that doesn’t work, then we are supposed to scream it at the top of our lungs to get as much attention as possible.

And what if screaming “NO!” at the top of our lungs doesn’t work? What if chanting our little mantra and denying our consent doesn’t do a damned bit of good when the drunk-ass guys at the bar are ignoring our requests and wrapping their arms around us against our will.

We flee if we are able. We hope to be able. We hide. We quit going out and quit socializing for fear that it will keep happening, because if it keeps happening to us, then it must be our own fault, or so society tells us.

We live in a society that by and large blames victims. Truth: no woman asks to be raped, no man asks to be beaten and robbed, and no child asks to be abducted. But it always comes back to the victim. “She was flirting with the guy at the bar, being a tease. What did she expect?” “He should have known better than carry that much cash with him when he went out.” “Those parents shouldn’t have let their kid walk down the street by himself.” We’ve all heard this shit. In actuality, though, the victim did nothing wrong. Some sick-ass fucked up individual happened along and committed a crime. No one was asking for it. 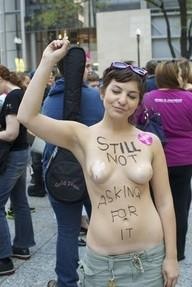 3 thoughts on “No Excuses”