I’ve mentioned before that I have anger issues. I do lose my temper often, sometimes several times in a week. But as much as that is due to my difficulty with managing my anger, it also is caused by the stubbornness and selective hearing of my children.

My oldest son, 9 years old, codename Red, was watching Wipe-Out on TV. He decided that he wanted to use Legos to build his own Wipe-Out obstacle course. That is totally fine. He told me he wanted to put the Legos over/in real water because that’s how the show does it. That is not fine. Firstly, Legos + sink/tub with drain = lost Legos. And secondly, we live in a rental house with real hardwood floors. I’m not letting him randomly play with a bowl full of water.

Me: “You can use some more Legos, or a blanket or something else to make pretend water, but we aren’t putting the Legos in real water.”

So he pouts a bit, wanders off, and keeps building his course. About an hour later, he comes back around to me.

Red: “I know, I’ll get a bowl and fill it with real water, then it will be like the show.”

Me: “No, I already told you that you are not using real water.”

Red: “If I get a bowl of real water, then it will be just like real Wipe-Out.”

Me: “Son, I have told you, you are not getting a bowl of real water, you are only going to end up making a mess that I will have to clean.”

And now this is my general mood

Red: “I got my obstacle course all finished. Now I just need a bowl of real water.”

Me: “SON I HAVE TOLD YOU REPEATEDLY THAT YOU ARE NOT PUTTING YOUR LEGOS IN REAL WATER, QUIT TELLING ME THAT YOU ARE GOING TO GET A BOWL OF REAL WATER, IT IS NOT HAPPENING, AND IF YOU SAY IT ONE MORE TIME I WILL TAKE ALL OF THE LEGOS AWAY FROM YOU AND YOU WILL PLAY WITH NOTHING! DO YOU UNDERSTAND ME?”

And that’s what it’s like when my kids just do not listen to me and I end up losing my shit.

*Post script: after said instance of losing my shit, Red decided to use a fuzzy blue blanket as the pool under his obstacle course. 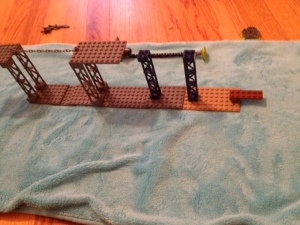