When last we left our insipid heroine, she had just caught sight of Mrs. Robinson. She reacts:

“Greta, who is Mr. Grey talking to?” My scalp is trying to leave the building. It’s prickling with apprehension, and my subconscious is screaming at me to follow it. But I sound non­chalant enough.

Guys, her scalp is trying to leave the building. HER SCALP IS GOING AWOL. What the hell does that even mean? I guess it doesn’t matter , though, because she sounds nonchalant enough. I mean, wut?

*sigh* See this, this shit is why I have to give myself a pep talk every time I come back to work on this project. I mean, yes, the story is ripped straight from the pages of twilight, and yes, the relationship portrayed is abusive as hell, as previously pointed out by myself and a ton of other people. But those things make me angry, and anger I can work with. The writing in this book… It just punishes you.

Me, trying to read this book.

Moving on, Ana is mad that Christian brought her to the salon where 1) Mrs. Robinson apparently works and 2) he brings all of his subs to get “the usual.”

I can’t really complain about that. Your anger is justified here, Ana, let it all out.

They argue, and for a couple of pages they seem like a normal couple, which is nice. But as Ana’s giving CG hell for this latest crap, his phone apparently goes off. (I have a theory on this.) CG says it was his head of security calling with some new information on the Leila situation. And oh, shit, things are bad, Leila can get a gun (more on that shortly), and he needs to move Ana TO KEEP HER SAFE, OKAY EDWARD WE GET IT. (Plagiarism point here.)

But here’s my theory on that phone call:

From Ana’s POV, his brow creases suddenly. Hold­ing his finger up, he fishes his Blackberry out of his jacket pocket. It must be vibrating because I don’t hear it ring.

I don’t think it was ringing. Or vibrating. Or doing any damn thing. But Ana had him on a couple of solid points, and wtf could Christian do about it. Not shit, that’s what. Except suddenly, at just the right moment, get a phone call with some disturbing news that makes Ana’s anger seem insignificant.

You’re damned right I did.

On the gun thing: CG tells Ana that Leila has just gotten a concealed carry permit, and judging from his “phone call” she was able to do so with no background checks or waiting periods or anything. Uh-huh. In Washington state. Uh-huh…

Okay, in about 30 seconds I was able to go from Google to the Washington Department of Licensing FAQ page, right here.

The dumbest part of this whole exchange though, is Ana’s reaction to the news that Leila has a concealed carry permit. “That means she can just buy a gun,” she whispers, more worried about CG’s welfare than her own, because she is Bella (plagiarism point).

The whole concept of a concealed carry permit here is ridiculous and infuriating, because it has no bearing on the antagonist’s ability to purchase a gun, and frankly if Leila is in the midst of a mental breakdown and wants to get a weapon to threaten Ana or Christian with, I highly doubt she cares about a permit. This just makes the main characters look even dumber than before.

Moving on, Ana packs a bag to head to Christian’s apartment, he refuses to let her drive (plagiarism point), and she briefly quizzes him on the looks of his previous subs.

Oh, let’s play this game again! Which quote is from Edward, and which is from Christian?

Then there’s this bullshit: Mrs. Extraordinarily-Glamorous-In-Spite-Of-Being-Old Robinson. Okay, Ana, go fuck yourself. Seriously. (Also, plagiarism point because Bella is so obsessed with aging and apparently thinks anything over 18 is old.) But seriously Ana, go and fuck yourself. You described this lady as being in her “late thirties or forties,” and this is at least the second time you’ve called her old.

Late thirties is not old. Forty is not old. And knowing that the woman who actually wrote this stuff is older than me… What the ever-loving hell, man? And the dig Ana makes that being “old” implies that you can’t/shouldn’t be glamorous… Grr..

You know what, Ana. I’m staring down my mid-thirties, and 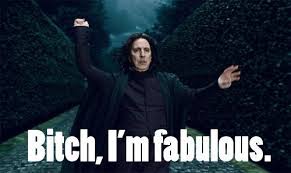 They get to Escala, which is CG’s apartment building, as opposed to Esclava, the beauty salon. Oi.

Blah, blah, blah, Franco arrives to cut Ana’s hair. He fawns over how wonderful/beautiful she is, blah, blah. Also, damn at the racist accents.

But hey, the word “dazzle” is used about Christian, so plagiarism point and

I will use this image at every opportunity.

Blah blah blah, talk about how rich he is and money doesn’t matter to him (plagiarism point).

Ana talks about how she doesn’t want all the gifts, just him (plagiarism point).

While Ana is cooking lunch, Christian tries to seduce her and comments on how good her hair smells, so plagiarism point and

The rest of the chapter seems to be plagiarism free, so: they kiss, there are sudden CG mood swings (oh, wait, plagiarism point there), lunch, teasing, a scene where he has her draw on him with so she knows where not to touch him (because of his literal scars from being abused as a child; this was actually not a bad scene), and then the chapter ends as they are about to have sex.

Man, these chapters just have too many shifts in them. This one chapter has scenes at the salon, on the sidewalk, at Ana’s apartment, in the car, in Grey’s apartment foyer, then Ana’s closet, Grey’s office, the kitchen, and the bedroom. And I possibly missed a setting or two.