This post is going to be a shorter one, because this is another of those “all over the place” chapters that takes forever to convey not a lot of information.

So we open with previous end of chapter cliffhanger sex scene, then there is immediately another sex scene… Then Ana takes a shower and we are gifted with her wonderful inner monologue where she thinks about Christian’s money, their sex life, and his previous sexual partners.

While Ana gets dressed, she puts on the Christian Louboutin shoes, a steal at three-thousand two hundred ninety-five dollars. Yes, we get it, Chedward is rich and generous. Plagiarism point.

Also he gives her diamond earrings that he had wanted to give her before. “This is my second chance,” he murmurs, his voice stiff with some unnamed emotion. He’s nervous.

Um… You just named the emotion.

Also, there was a thing with some ben wa balls, even though they are never named as such.

After Ana finishes getting dressed, they have some booze and a little more banter, and Christian shows her the library. 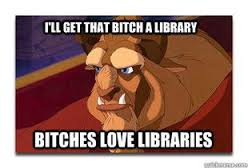 (FYI we are already eight pages into this chapter.)

I should mention that Christian, Ana, and the brothers Ben and Wa are on their way to a masked ball/charity aution/party that his mother is hosting.

And judging by the description of the driveway, Alice Cullen popped over to decorate. Plagiarism point. Is this party supposed to mirror the graduation party in Eclipse?

Wait, no, I think it’s supposed to be kind of like the prom, because they have an arbor set up for the guests to pose at for souvenir photos. Whatever.

We approach a large white pergola hung with smaller versions of the paper lanterns. Beneath it, shines a black and white checkered dance floor surrounded by a low fence with entrances on three sides. At each entrance stand two elaborate ice sculptures of swans. The fourth side of the pergola is occupied by a stage where a string quartet is playing softly, a haunting, ethereal piece I don’t recognize. The stage looks set for a big band but as there’s no sign of the musicians yet. I figure this must be for later. Taking my hand, Christian leads me between swans onto the dance floor where the other guests are congregating, chatting over glasses of champagne. 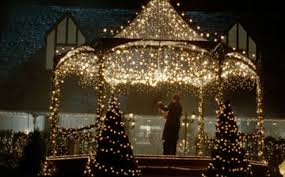 This is worth at least one-half of a plagiarism point.

Oh, and Christian smiles at some ladies as he rescues Ana from them, and his dazzling smile [does] what it always does.

So, another dazzling plagiarism point.

The total plagiarism point count will be in Part 2.